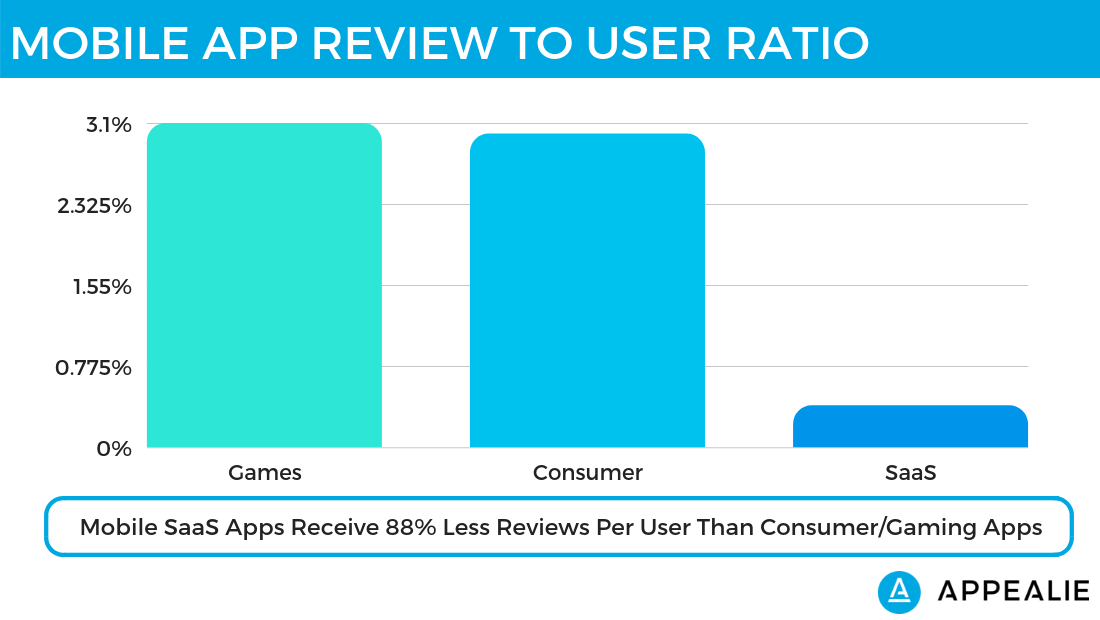 Posted at 15:37h in Uncategorized by Konstantin Kalinin
Share

Browsing through an app store, which of these apps would you choose to manage projects at your company?

Our bet is, in this case, it’s going to be Wrike — the highest-ranking app in the list. And you would not be alone. According to Apptentive, a major authority on mobile customer feedback, 75 percent of their survey respondents identified reviews as a key driver for downloading an app. Google, too, acknowledges the importance of user reviews:

Does it mean that as a SaaS mobile app owner, you should focus on obtaining more and more app reviews? Our recent study at APPEALIE says you don’t, and here’s why.

Expect reviews from 2 to 10 percent of users

After quantifying the user bases and app reviews of 74 unique SaaS mobile apps and comparing them with signature mobile games like Candy Crush, we’ve discovered that business apps receive 88 percent less reviews per user than games or consumer apps.

Depending on the type of SaaS mobile app, you may count on getting reviews from a mere 2 to 10 percent of your customers.

These unimpressive SaaS app review numbers seem to be in line with the overall trend of declining interest in mobile business apps.

According to App Annie’s State of Mobile 2019 market report, the Business category didn’t even make it to the top 10 categories in either App Store or Google Play, while being the second biggest category in both app stores.

Looking at Google Trends, we can see that this downward tendency is reaffirmed in search, especially in the last two years — with the search volume for “mobile business apps” rapidly diminishing.

One plausible explanation for this trend is the desktop nature of most SaaS applications. While old-fashioned, it’s still much more comfortable to add another entry to a CRM on a larger screen, using a mouse and a keyboard.

The mobile “magic” disappears the moment you start fiddling with a smartphone or tablet to process lots of data or to do any of the non-trivial work stuff, like editing a document or applying a batch update in a CRM.

Neither Deal Breaker Nor Maker

And so it’s only natural that SaaS mobile apps often become the stripped-down versions of full-fledged SaaS applications, providing users with only basic, on-the-go features. Such apps get fewer reviews from your customers, and that is fine.

So if you are benchmarking your Saas app against consumer apps, trying to get app reviews from more than 10 percent of users, you may finally relax and focus on other pressing tasks. As long as at least 2 percent of your customers leave an app review — you are absolutely fine!